SAM: A TALE OF FOUR TAILS 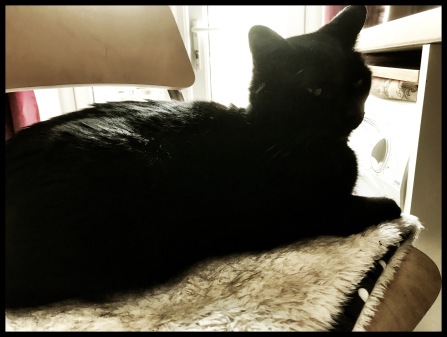 Sam is a stunning part Siamese cat who certainly knows his own mind. His Mum got in contact with me as he was exhibiting some territorial behaviours that were getting a little out of hand.

Sam has been spraying in the house, but in some rather worrying places such as electrical sockets.  Furthermore he has been very ‘bossy’ with his fellow animal brothers and sisters, namely two other cats, a dog and a guinea pig!

When I first met Sam he came across as a real clown. He said hello then took himself off to size me up properly.  After consultation and conversation with his ‘Mum and Dad’ we decided on Reiki healing but I brought along some gentle crystals to complement the Reiki.  The feeling that he impressed strongly on me was that he identifies himself as an equal human and higher in the pecking order than the young adults in the household!

Sam’s initial reaction to the healing Reiki energy was to play but once he’d settled I was able to grid him with some Rose Quartz and allow him to be as he wanted.  The wonderful thing about Animal Reiki is that animals will only take what they need.  As sentient beings they are highly sensitive to healing energies mores than us mere humans!

I dowsed one of the areas he regularly sprays in the lounge, to check for any electrostatic energy from electrical items.  My instinct seems to have been right and I offered a spare, reikied amethyst crystal as these help to block and diffuse these energies.

After his first session, the feedback from his Mum was that he hadn’t sprayed in the lounge once (where the amethyst crystal has remained), although he is still spraying in the other location (no crystal). Furthermore he had been immediately and noticeably better behaved with his ‘siblings’.  I offered a free half hour follow up appointment, when this photo was taken, a couple of weeks later.

This time Sam knew exactly what my visit was all about and after he’d set some ‘ground rules’ he curled up and chilled right out. The Reiki flowed strongly and he wiggled to get my hands into the exact places he dictated.  His mum observed he looked almost drunk when we had finished his session and he finally hopped off his throne to sit and lap up some sunbeams on the front doorstep.

A week later and the feedback is he’s still really chilled out … but still peeing where there isn’t a crystal.  A little more work maybe needed here.

If you have a pet or equine that you feel may benefit from the positive healing of Reiki therapy then drop me a line to chat further about how I can help you.